For today’s prompt, write a poem about (or at) a food establishment. You could pick on a chain like Taco Bell or McDonald’s, sure, but maybe there’s a local favorite–or some special dive. Heck, maybe that place where you took your first date or got your first job. Have fun with it, and if you need to do a little research, go out for something to eat. 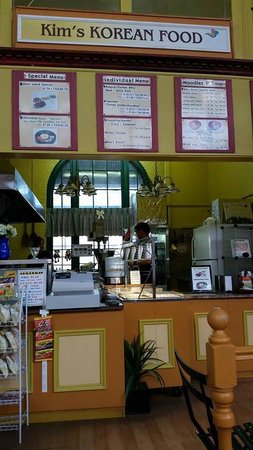 This photo of Kim’s Korean Food is courtesy of TripAdvisor

Kim’s is one of my favorite places to eat as it is of many lunch-timers. My poem sounds disrespectful of cultural differences. I assure you I’m not trying to demean foreigners but acknowledge my own prejudices. This is a poem, not a report. These are the images I see and sounds I hear, but my words are fictional. These are the emotions I extrapolate from my ignorance. Read it, put your place in the WASP’s shoes, and smile. Thank you 4077 MASH and mid-twentieth century film for tainting my view.

Thankfully our city has mostly welcomed immigrants and refugees. I am an American immigrant. Our little east coast city, traditionally a city of working people is also rife with vibrant artists, forwards thinkers, progressives if you will, uncertain what that really is. We have a smattering Chinese, Korean, Columbian, Israeli, Brazilian, Portuguese, Japanize, and Guatemalan communities, and more. Recently add many Syrian refugees. We still have some Arabians, but rumor is a wealthy prince pulled the plug on their emigration.  Regardless, at no other time in the history of this little city has there been such a variety of cuisine offered. And I love it!

He points a finger at a picture
Fried pork, I think he says, in the language he’s trying to learn
I can’t spell the sounds I hear
The brown wags in the air, his fat finger
Looks suspiciously like the battered bits in the tray
His entire face smiles, except for his eyes
Approval a knowledge game, acceptance delivery
I only trust what I know

Bibmbap, I ask for once again, and a Diet Pepsi
Extra sauce
Ten dolla in the till, zeo rung in
His bobble-head barks orders at the woman. The tall boy watches
His conductor arms land a perfect egg, sunny side sizzling
The two person – the one person and the silent wife – process
Foil bowl, lice, carrot, lettuce, hammyburger

The fat finger wags at hunched backs
The Korean War command to charge the hill, with a million rifles
Eggy echoes
The woman one-strokes her head and tightens her eyes
Waves for my selected choice of picking mouthfuls, as the egg lands in its nest
Chopsticks wrapped, foil sealed, bag tightened
Pepsi. Don’t forget my Pepsi.
She smiles, at me
Next